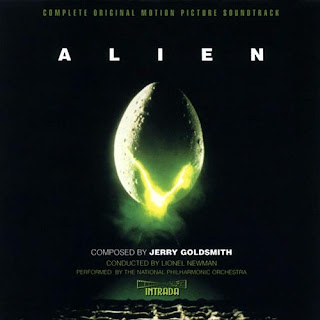 - by Rafael Ruiz, at Soundtracknet

In 1979, composer Jerry Goldsmith wrote his best score. At times majestic, at times frightening, the movie told the story of space travelers confronted with an alien threat. It spanned a motion picture franchise with a devoted that continues to even today.

He also wrote Alien, which wasn't too shabby itself.

Goldsmith was on fire at this time. He had just won an Oscar two years previously for The Omen and was writing one score after another. In 1977, he did eight scores alone. In the wake of Star Wars, epic scores were a rage again and Goldsmith was able to write the full-bodied scores he was capable of. He would compose Great Train Robbery right before this one and Star Trek: The Motion Picture right after. Even surrounded by greatness, Alien still stands as one of Goldsmith's great compositions.

To some people, Alien has lost its allure. It is slow and the shocks no longer surprise anyone familiar with the other movies. Many just prefer the high-octane thrills of the equally classic sequel Aliens. Taken on it's own terms, Alien is still one of the best horror movies (and science fiction movies) ever made. It was a revolutionary movie at the time, for more than just the frightening life cycle of the title character. This would be the first grungy science fiction movie with dark claustrophobic sets and working class protagonists. Never had a woman been a hero in this type of movie. Think of how many horror movies you've seen where the final characters are a tough-as-nails female lead and a sharp talking black character. All due to this movie. The Romero zombie movies don't count. The best way I've heard it put about Alien is (I'm paraphrasing), "it is to Star Wars as The Rolling Stones are to The Beatles."

Goldsmith split the score into two styles. The theme for the spacecraft Nostromo and its doomed crew is a romantic trumpet and orchestra theme ("Main Title") that is followed by a mysterious two-note echoing motif. It suggests both primal wonder for the great unknown and the nagging fear that follows it. This plays out wonderfully in the next track ("Hyper Sleep") where the crew slowly wakes up. As the pedals of the sleeping pods open, the orchestra buildings to a crescendo then followed by the solo trumpet. It is moment of great film music that Stravinsky would have been proud of. One track later, "The Landing" uses the alternating motifs more aggressively, giving the seeming standard landing of the spacecraft a dangerous undertone.

Once they get to the planet, the other style of the score emerges. "The Terrain" and "The Craft" uses whole tone repetitions that echo off, repeated by steel drums and marimbas. It suggests a place long dead and mysterious. The tone intensifies with the following tracks. "The Passage" and "The Skeleton" have the same echoing effect (using an echoplexed Indian conch and whole tone repetitions). With high pitched strings that are counter balanced by a flute solo, the tension builds to an unbearable level.

I don't usually go track by track like this, but what Goldsmith did in this section was to reinvent horror movie orchestration. Many of the elements used here had been done separately before, but never together at this level of mastery. Most horror scores tend to work a simple level of "does this make you feel uncomfortable" or "does this scare you". Goldsmith's compositional genius is that he is able to suggest other levels at the same time. I can't say it better than director Ridley Scott who commented that "it gives a sense of scale, architecture and civilization, though not as we know it."

Goldsmith very well knew that to suggest something "alien" he had to create sounds both unfamiliar and threatening. Goldsmith was always a fan of experimenting with ethnic instruments. Here he would use the Indian conch, along with a didgeridoo, serpent along with odd sounds of struck pianos strings and other random noises, subtle synthesizer stings and echoplexed effects. First fully introduced in "Here Kitty" the Alien theme gives us a ferocious creature seemingly like a large insect and a reptile at the same time. In "Parker's Death" and "Sleeping Alien" the didgeridoo rattles like a coiled rattlesnake, ready to strike. The horn call sounds the cry of some foreign animal. We instinctively tense up at these sounds and the driving strings keeps us moving. Countless follow horror soundtracks would use small variations of these effects over the years.

But a great score is one that makes every track a winner, and Goldsmith gives us every variation of building suspense there is without a false note. There's moody environmental cues like "The Lab" and "The Eggs". There's slow build suspense cues such as the "The Shaft" and "Hanging On." There's high energy action cues like "It's A Droid" and "Out The Door" He even does dissonant abstract cues in "A New Face" and "The Eggs".

From the original sessions alone, this was one great score. And with the restoration, the music sounds the best it ever has. And to make this fantastic release even better..er, it contains the original session recordings and the rescored alternative versions. For anyone who knows the history of this score, this is a very big deal.

The writing of Alien is one of the great composer/ director conflicts in film music.
During the post-production of the film, Editor Terry Rawlings used temp music from previous Goldsmith scores, most specifically Freud (1963). Ridley Scott had Goldsmith rewrite a number of cues, including the main titles to give the movie a more obvious spooky edge from the outset ("written in 5 minutes" by Goldsmith's words). Then Scott licensed the original temp music and used it in the movie. The finale and closing titles were then changed to Hanson's Symphony No. 2. Goldsmith was, understandably, not too happy with being reedited and ironically this would not the only time. When they worked together again on Legend (1986), Scott would replace Goldsmith's entire score with one written by Tangerine Dream for the American release. Though, in all fairness, not by choice.

I'm personally fond of a lot of the changes Scott made. The opening titles tell us clearly what we're getting into and the other rewritten tracks are only subtly different. I think the Freud cues feel out of place, more in their recording quality than in tone. At the same time even I admit Goldsmith's original score is just as good. Either way, you're getting everything excluding the Hanson Symphony and the tracks from Freud, which deserves its own soundtrack re-release. If that wasn't enough, also included is the original '79 album release and eight minutes of demonstration excerpts, with separate versions of the unique alien instrumentation.

This is my favorite classic re-issue of the year. That's because it was co-produced by Mike Matessino. He (along with producer David C. Fein) was responsible for the groundbreaking Alien and Aliens laserdisc box sets. They also did the first Alien DVD release which contains the still unique two isolated score tracks, one with the original music and the second with the changed cues. If there's anyone that knows what an Alien album needs, it would be Matessino and fellow album producer Nick Redman. They know a real fan wants the details and this album gives us exactly that with exquisitely detailed and researched linear notes.

A comprehensive album of a classic score. 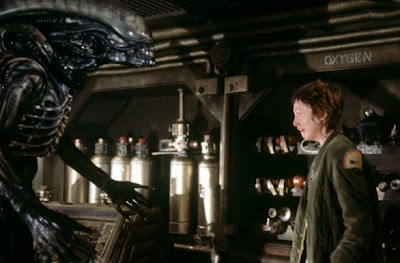